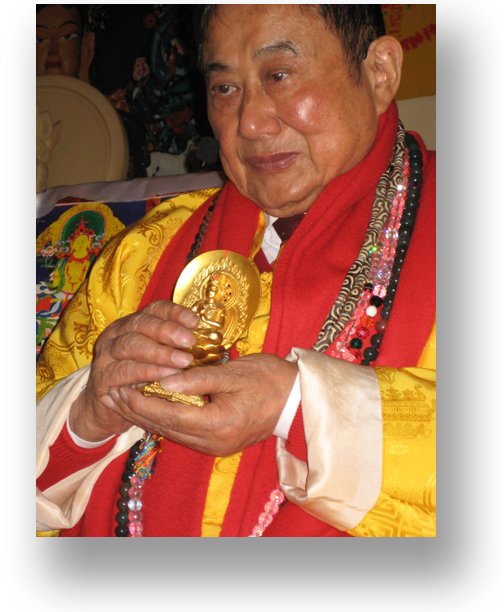 Grandmaster Professor Thomas Lin Yun was the spiritual leader and founder of Black Sect Tantric Buddhism in its fourth stage of development. His teachings are philosophical, spiritual, and practical, synthesizing the best of ancient and contemporary knowledge. They incorporate the essence of ancient wisdom such as Confucianism, Taoism, Yin-Yang philosophy, Eclecticism, the I-Ching, Feng Shui, holistic healing, exoteric and esoteric Buddhism, as well as modern knowledge such as psychology, physiology, medicine, architecture, urban planning, interior design, etc.

Born in Beijing, Professor Lin Yun began studying Black Sect Tantric Buddhism at age six with his first master, Lama Da De at Yong-He Palace. At age 17, he went to Taiwan where he continued studying under other masters of the same lineage, Master Hui Chich-fu and Master Cheng Kuei-ying, along with many other distinguished philosophers, artists, and Buddhist masters. Through many years of study and meditation, Professor Lin Yun developed profound insights leading to unique theories and teachings, while helping numerous people solve their problems sharing transcendental solutions.

For more than four decades, he taught his philosophies, theories, and practices to students around the world to help affect peace, harmony, and success in today’s contemporary world. His most notable achievement, amidst a long list of awards and accomplishments, was, perhaps, bringing Black Sect Buddhism, especially his Feng Shui teachings, into mainstream western society.

Professor Lin Yun traveled extensively lecturing at institutions and events worldwide. He was invited to speak at the Parapsychology Society of the United Nations, the Library of Congress, the American Institute of Architects, Harvard, Yale, Princeton, MIT, UCLA, UC Berkeley, Stanford, Cornell, University of Minnesota, Duke University, John Hopkins University, University of Hawaii, Oxford University in England, Universities of Duisburg and Munich in Germany, Universities of Beijing and Qinghua, and the Chinese Academy of Social Sciences in China.

In 1986, Professor Lin founded the Yun Lin Temple in Berkeley, California, the first contemporary Black Sect Buddhist temple in the West. In 1994, he established the Lin Yun Temple in Long Island, New York. The temples are dedicated to Black Sect Tantric Buddhist teachings, promoting Chinese culture and philosophies, and providing blessings and guidance to anyone in need.

His efforts in preserving the spirit of the Bon tradition—the roots of the Black Sect—were honored by His Holiness Men-Ri Lungtok Tenpai Nyima, the Supreme Leader of Tibetan Bon tradition and 33rd Abbott of the Bonpo Menru Monastery in India. In November 1998, in a special consecration ceremony held at the Yun Lin Temple in Berkeley, the title of His Holiness Grandmaster Professor Lin Yun Rinpoche was bestowed upon the Professor as a guardian of the Bon lineage, making him the Supreme Leader of Black Sect Tantric Buddhism in its fourth stage.

His Holiness Grandmaster passed away on August 11, 2010. Our teachers are here only for a while, and then they are gone. We deeply treasure the opportunity we had to be close to him.